Born June 1, 1969 in Tokyo, Tomohiro Okumura Started playing the violin at the age of four. He received the 1st prize, Masuzawa Award at the 53rd Japanese Music Competition in 1984. After graduating from high school, he studied abroad at the Juilliard School as a scholarship student. In 1990 he debuted in New York with the New York Concert Orchestra and Laro's Spanish Symphonie at Carnegie Hall. In 1992, he won the Karl Flesch International Violin Competition and at the same time received a special prize for his Paganini performance. He won the Naumberg International Violin Competition in 1993, and performed with orchestras all over the United States, receiving glowing reviews from The Washington Post, Los Angeles Times, and Philadelphia Inquirer. His New York debut recital at Alice Tully Hall in Lincoln Center in February 1994 received praise from The New York Times, especially for his interpretation of Bartok. He also performed recitals at the Kennedy Center, Flick Museum, Gardner Museum, and the Krannert Center. In Japan, he has performed with NHK Symphony Orchestra, Yomiuri Japan Symphony Orchestra, New Japan Philharmonic Orchestra, Tokyo Symphony Orchestra, Central Aichi Symphony Orchestra, Orchestra Ensemble Kanazawa, and recitals at Hamarikyu Asahi Hall, Tokyo Opera City Recital Hall, and Takarazuka Vega Hall.

In April 2003, he soloed on Glazunov's Violin Concerto with the Tokyo Symphony Orchestra under the direction of Naoto Otomo. In May 2003, he soloed on Prokofiev's Violin Concerto No. 2 with the Bolsan Istanbul Philharmonic Orchestra under the direction of Gull Aikal. He appeared on NHK-FM masterpiece recital in July 2003, attracting attention with an eclectic song selection and versatile technique.

Based in Japan since 2002, Okumura has been touring in Japan, the United States, and Europe. He studied under Saburo Sumi, Masafumi Hori, Toshiya Eto, Dorothy DeLay, Masao Kawasaki, and Felix Galimia. Released three CDs and received high praise from magazines such as "Mostly Classic". Since April 2009, he has also been a part-time lecturer at the Junior and Senior High Schools attached to the National College of Music. 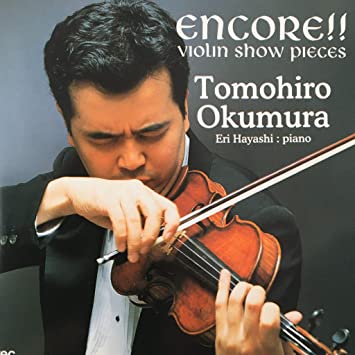